The Ferrari 812 Superfast made its first international dealer launch at a special preview in Dubai by Al Tayer Motors – the official Ferrari importer-dealer in the UAE. The car, which roared into this year’s Geneva International Motorshow, was revealed to VIP guests at an exclusive event held on the roof-top of the Viceroy Palm Jumeirah Dubai – the city’s newest hospitality venue.

The event, themed ‘Shift to the 12th Dimension’, referring to the V12 heritage of the car, incorporated various elements representing the number 12 to highlight the powerful engine under the bonnet of the car.

Speaking at the launch event, Hossam Hosni, Vice-President – Ferrari at Al Tayer Motors said: “It is an exciting time for UAE Ferraristi given the launch of the newest V12 car from Maranello. We are pleased to be the first dealer in the world to launch the 812 Superfast, which underscores the importance of the UAE market to Ferrari. We have received tremendous interest in the car and look forward to seeing it on the roads of the UAE very soon.” 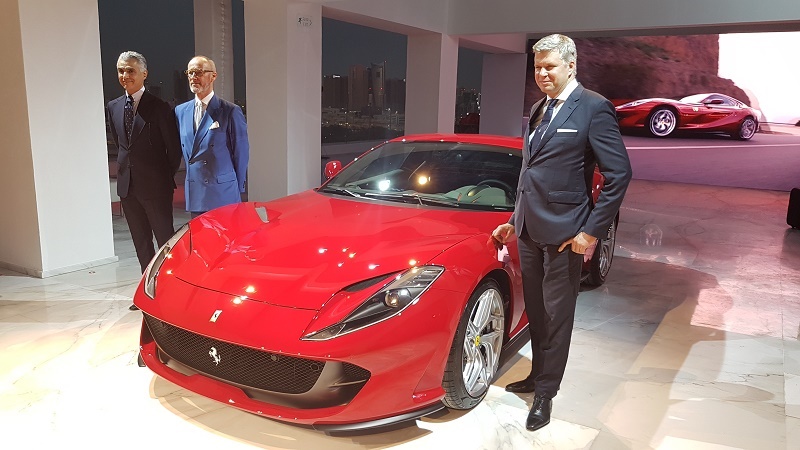 The unveiling of this flagship V12 berlinetta is particularly significant, as Ferrari’s noble V12 heritage has its roots in the founding of the company 70 years ago. Ferrari remains to this day the only manufacturer to have continuously produced sports cars with 12-cylinder engines throughout that time.

Powered by a new 6.5-litre V12, the 812 Superfast is the benchmark in the mid-front-engined sports car segment, achieving its maximum power output at 8,500 rpm, which ensures the kind of thrilling top-end performance that is the exclusive characteristic of Ferrari’s V12s. Maximum torque is 718 Nm @ 7,000 rpm, a significant 80% of which is already available at 3,500 rpm, improving driveability and pick-up at low revs.

The 812 Superfast is striking for both its highly innovative design and aero package, as well as its unparalleled handling. It is the first Ferrari to introduce Electric Power Steering (EPS) which, in line with Ferrari tradition, is used to fully exploit the potential of the car in terms of performance. The introduction of the Virtual Short Wheelbase 2.0 system (PCV) combines the electric front-wheel steering assistance with the mechanical concept based on tyre dimensions and the rear-wheel steering. All integrated with the vehicle dynamics control systems, based on Version 5.0 of the Side Slip Control (SSC), with the aim of improving the agility and response time to steering wheel inputs.

The car was launched in a special new color, Rosso Settanta, which marks Ferrari’s 70th anniversary.

The 812 Superfast was unveiled to select guests and clients in Dubai following which the car will be showcased in a series of private previews at the Ferrari Challenge event that will be held at the Yas Marina Circuit at Abu Dhabi on April 8.

This scheduled maintenance program for the car is an exclusive service that allows clients the certainty that their car is being kept at peak performance and safety over the years.

The Genuine Maintenance program further broads the range of after-sales services offered by Ferrari to satisfy clients wishing to preserve the performance and excellence that are the signatures of all cars built in Maranello which itself has long been synonymous with leading-edge technology and sportiness.

The first S Hotel in the Middle East celebrates its grand opening in Al Barsha Dubai, with VIP guests and media gracing the grand ceremony. A stylish and elegant retreat […]